Our House Groups are named to represent National Patron Saints of the United Kingdom. 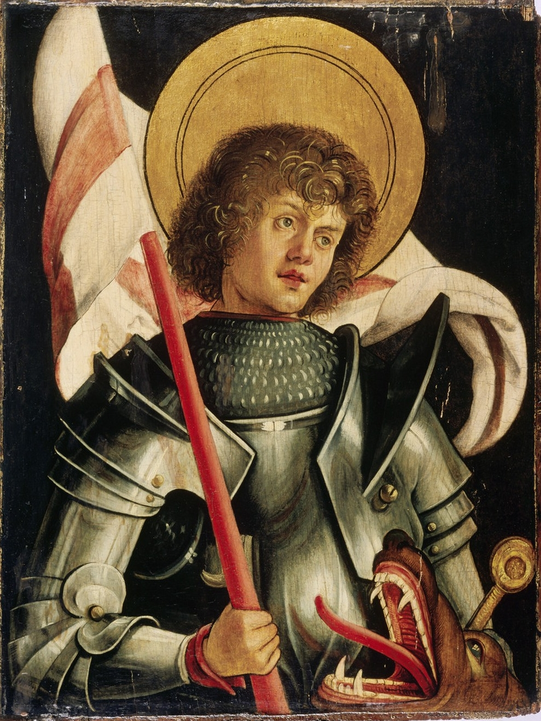 Saint George is the Patron Saint of England.

According to a legend, Saint George of Lydda killed a dragon and saved the lives of many people. It is sometimes called 'The Golden Legend'. It is a legend that is older than Christianity, which some people believe is based on gods from different religions, such as Sabazios.

A city called Silene had a large lake, where a plague-bearing dragon who breathed fire and disease lived. The dragon poisoned all the countryside. To please the dragon, the people of Silene gave it a sheep every day, for food, and when there were no more sheep, they gave their children to the dragon. The children were chosen by a lottery.

One year the lottery chose the King's daughter. The King, sad and desperate, asked the people to take all his gold and silver, and half of his empire - but only if his daughter could be saved. The people refused. The daughter was sent out to the lake, dressed in white as a bride, to be a fine meal for the dragon.

Not knowing this, Saint George was riding past the lake on the same day. The princess, terrified and trembling, tried to send him away, but George said he would stay and protect her. The dragon came suddenly out of the lake while they were speaking. Saint George made a gesture called the Sign of the Cross, jumped on his horse and advanced toward the dragon. He used his long spear to hurt the dragon badly. Then he asked the princess to throw her long pretty belt to him. He put the silk belt around the dragon's neck. Now, the dragon followed the girl like a humble pet follows its master.

The King and the people of Silene converted to Christianity, George killed the dragon with his sword, 'Ascalon', and its body was taken out of the city on carts. Fifteen thousand men were baptized, not counting women and children. On the site where the dragon died, the King built a Church for the Blessed Virgin Mary and Saint George. From the altar in the church came a fountain of holy water. The water cured any disease.

St. George's Day is celebrated every year on April 23 in his honour. 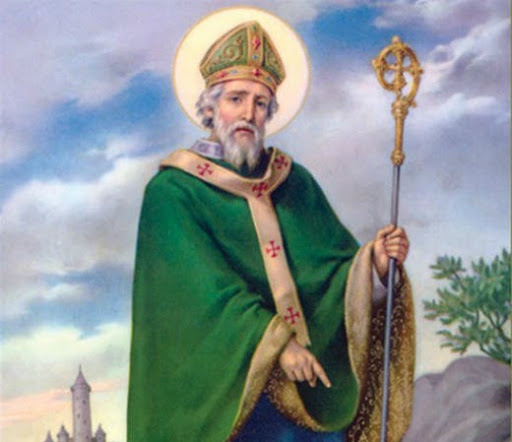 Saint Patrick is the Patron Saint of Ireland.

He was born in a village in Roman Britain. Saint Patrick came from a Christian family. He was the son of Calpornius, who was a Deacon. According to the autobiographical Confessio of Patrick, when he was about sixteen years old, he was captured by Irish pirates. They took him from his home in Britain and sold him as a slave in Ireland. His work was to take care of animals. He lived there for six years and learned the local language. He then escaped and returned to his family.

After becoming a cleric, he returned to northern and western Ireland as a missionary. Because he knew the language he could preach to the people. He also married couples when the King prohibited it. He brought Christianity to Ireland. He converted many pagans to Christianity. He also challenged many of their leaders and druids such as Aodhan the Brave also known as Chief Aodhan.  St. Patrick eventually converted Chief Aodhan and they worked together to convert many other pagans.

St. Patrick's Day is celebrated every year on March 17 in his honour. 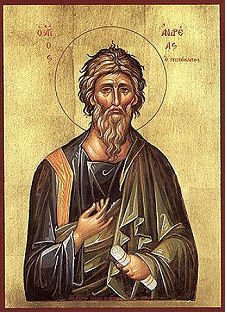 Saint Andrew is the Patron Saint of Scotland.

Saint Andrew was one of the Twelve Apostles of Jesus Christ. His brother was Saint Peter. Saint Andrew is the patron saint of Scotland and of Russia.

Andrew and his brother were fishermen. They were called from their fishing by Jesus, who promised to make them fishers of men. Andrew is always among the first Apostles listed in the Gospels of Matthew, Mark, and Luke. In the Gospel of John, Andrew is the first apostle named and was also a disciple of Saint John the Baptist before Jesus’ call.

Andrew may have preached in Greece after the death of Jesus. According to one account, Saint Andrew died in what is now Pátrai, Greece, sometime before ad 70. He was reportedly killed by crucifixion, or by being hung on a wooden cross. The cross was later described as X-shaped. The X-shaped cross is depicted on the Scottish flag.

Saint Andrew’s Day is celebrated every year on November 30 in his honour. 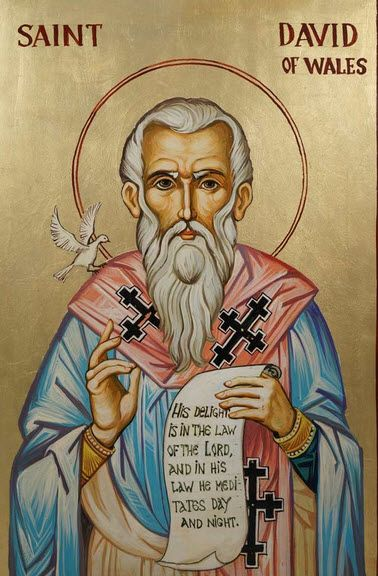 Saint David is the Patron Saint of Wales.

In Welsh, his name is Dewi. He is one of the most celebrated saints in Britain.

David was born about 520 near St. Bride’s Bay, Pembrokeshire, Wales. There is very little known about his life. Most of what is believed about his life comes from a biography written in about 1090 by Rhygyfarch, a Welsh scholar. According to Rhygyfarch, David was the son of a leader named Sant and Non, a woman who later was named a saint.

David became a Christian priest. He then lived on an island for many years to study the Bible.

Once he left the island, David founded a monastery, or religious house, at Mynyw (Menevia) in southwestern Wales. Life at David’s monastery was very strict. The monks who lived there had to work very hard. They were rarely allowed to speak. They ate only bread with vegetables and salt. They drank only water.

David founded many churches throughout southern Wales. He later moved the centre of the church government from Caerleon to Mynyw. David died in about 600 in Mynyw.

Saint David's Day is celebrated every year on March 1 in his honour.