The Day of Pentecost 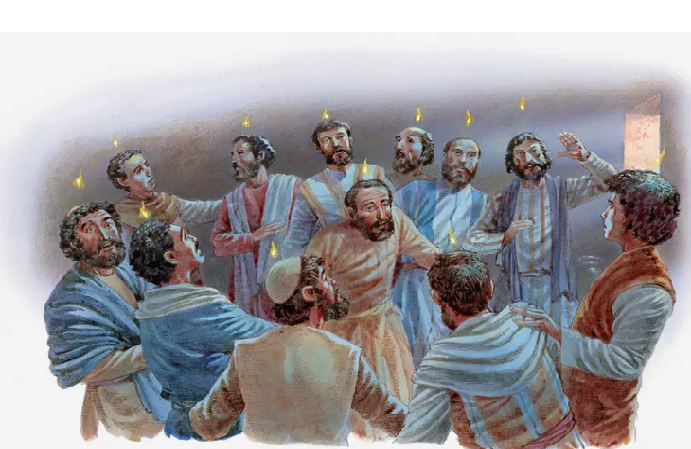 Pentecost always falls on a Sunday.

About 40 days after the resurrection of Jesus, the 12 apostles and other early followers were gathered together in a house in Jerusalem to celebrate the traditional Jewish Pentecost. Also present were Jesus' mother, Mary, and other female followers. Suddenly, there was a sound from heaven like the roaring of a mighty windstorm, and it filled the house where they were sitting. Then, what looked like flames or tongues of fire appeared and settled on each of them. And everyone present was filled with the Holy Spirit and began speaking in other languages, as the Holy Spirit gave them this ability.

Immediately, the disciples were filled with the Holy Spirit, causing them to speak different languages from around the world. The crowds of visitors were astonished because every pilgrim heard the apostles speaking to him or her in their own foreign language. Some people in the crowd thought the apostles were drunk.

Seizing the moment, the Apostle Peter stood and addressed the crowd gathered that day. He explained that the people were not drunk, but empowered by the Holy Spirit. This was the fulfilment of the prophecy in the Old Testament book of Joel that the Holy Spirit would be poured out on all people. It marked a turning point in the early church. With the Holy Spirit's empowerment, Peter preached boldly to them about Jesus Christ and God's plan of salvation.

The crowd was so moved when Peter told them of their part in the crucifixion of Jesus that they asked the apostles, "Brothers, what shall we do?"  The right response, Peter told them, was to repent and be baptized in the name of Jesus Christ for the forgiveness of their sins. He promised that they, too, would receive the gift of the Holy Spirit.

Taking the gospel message to heart, about 3,000 people were baptized and added to the fledgling Christian church on that Day of Pentecost.  It was also the day that Jesus’ disciples became convinced that Jesus had risen from the dead and went public and history was changed forever.