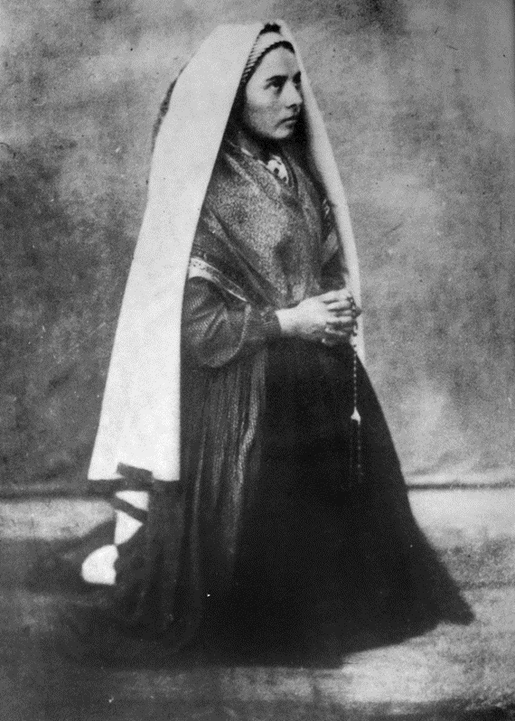 Our school is named after one of the most well known, yet most humble, saints in Church history, who has inspired many people by her simple faith and incredible life-story.

Bernadette Soubirous was born in Lourdes, France, into a very poor family and she herself was in poor health.

One Thursday, February 11th 1858, when she was sent with her younger sister and a friend to gather firewood, a very beautiful lady appeared to her above a rosebush in a grotto called Massabielle.  The lovely Lady was dressed in blue and white.  She smiled at Bernadette and then made the sign of the cross with a rosary of ivory and gold.  Bernadette fell on her knees, took out her rosary and began to say it.

The beautiful lady was God's mother, the Blessed Virgin Mary.  She appeared to Bernadette seventeen other times and spoke to her.  She told Bernadette that she should pray for sinners, do penance and have a chapel built there in her honour.

Many people found it hard to believe Bernadette until miracles began to happen when people used the water from the spring Bernadette had dug.

Bernadette became a nun when she was older.  Although she was favoured by the Blessed Mother, she remained very humble.  More than anything else she desired not to be praised, saying, "The Blessed Virgin only chose me because I was the most ignorant."

As a school we are guided in our lives by Bernadette's humility and her consideration for, and love of others, before herself.